I love running. I really do. But I also really, really look forward to taking a break from running after every marathon. Experts say that you’re supposed to take at least a full two weeks off from running following a full marathon, and I take that very seriously. And I enjoy every second of not running during that time.


During this two week break, I took the first week off completely. I didn’t do any type of physical activity. But during the second week, I started my at home strength workouts back up and went mountain biking three times!! 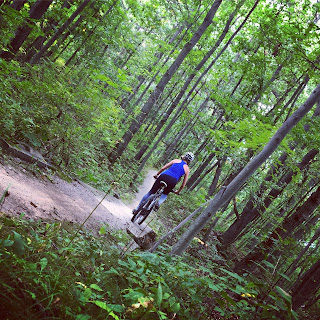 Me on my favorite trails at Addison Oaks Park. 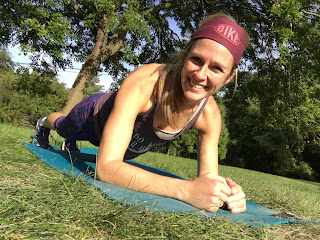 Holding a plank for one of my 20 minute strength workouts in my backyard.
I have embraced the change of seasons, and with that, a change of routine. It has been awesome. So refreshing, and exactly what I needed after soooooo much running this year. Honestly, after that last marathon and my health stuff, I was ready to hang up my running shoes and just take a break for a while.
And then, I went back to the doctor last week. Ya see, the symptoms that I had, that led me to getting a colonoscopy, are triggered by intense running. So, now that I’m not running hard, or at all, my symptoms are gone. In my mind, I was thinking I was pretty much home free until I decide I want to really work at my running again (which I’m not planning on doing any time soon…). But, the doctor was not of the same mindset. He wants to get this figured out with a definitive diagnosis…
Imagine this conversation:
Doctor: We need to do another colonoscopy when the symptoms are occurring.
Kendra: (Insert nervous joking) So you’re saying you want me to pick my running back up to an intense enough level that I cause these symptoms again?
Doctor: Well, yes. We need a diagnosis. And that’s the only way to get one.
.
.
.
FANTASTIC!!!
Did I mention I was ready to hang my shoes up for a while?!
So, in true Kendra fashion, I went ahead and registered for another marathon. Because if I have to start running again, you better believe I’m going to be working towards that 50 marathons in 50 states goal! Indiana…here we come!
Sparkle.Pounce.Make It Count.
-Kendra

Sometimes we decide to do things that we said we would never ever do.

I worked really hard, all year. Really, really hard. For my second try at my BQ, I even hired a running coach and tried an entirely new training plan. But my body just didn’t cooperate…again.

Through my second round of training, I started having some health issues. I wasn’t feeling well after a lot of my workouts and I was left weak, nauseous, and not having much of an appetite. In addition, I was having bowel issues (TMI….I know, I know…) that, after muuuuuuch pressure from my husband, my coach, and my sister, landed me at the doctor’s office.

Turns out my doctor wasn’t thrilled with my symptoms either, and he ordered some tests, including a colonoscopy. And let me assure you, if anyone tells you that the prep for one of those isn’t that bad, they are lying. It. Was. Awful. I will spare you the details, but just imagine having the stomach flu, and then multiply how awful that is by about 1 million. Yes. It’s that bad.

Anyway, that was about a week and a half before my marathon. Once that was over and my blood work came back normal, I felt confident that I could just take it easy, get lots of rest, and be ready to rock that race.

Then, the Friday before the marathon, I got home from work, grabbed the mail, and opened a letter stating that the polyp they had removed during my colonoscopy was precancerous and I would need to come back every 3 years to have the procedure.

This news hit me hard. I’m 36 years old. And healthy. I’M STINKING HEALTHY!!! And cancer was trying to grow in my body.

I felt such a mixture of sadness that it had even existed and relief that they found and removed it. I was kind of a mess.

And 15 hours later, I was in the car headed to Pennsylvania with my sisters to run a marathon.

I had approached this marathon differently by keeping it under the radar. That really helped me to not feel so much pressure about getting my BQ. And the day before the race, I felt pretty good.

Fast forward to during the race, and that was a different story. I was able to keep up my pace for only about the first 6 miles. Then, my body convinced my mind that it wasn’t capable of running that fast. As I tried to hold that pace, I felt weak and dizzy and was pretty certain I would not be able to cross the finish line at all if I didn’t slow down. So that’s what I did. I slowed down. And then I slowed down some more. And, once again, I just wanted it to be over. It was so hard. I just wanted someone by my side to convince me that I could finish.

Luckily, my sister Rondi got the news that I wasn’t having a good run, and she waited for me at the 13 mile mark. We jogged, shuffled, walked, nearly cried, laughed, and limped our way across the finish line to cross Pennsylvania off our list towards our goal of 50 marathons in 50 states (3 down!).

Me, Rondi, and Tanna, our super sister support crew!!

And, of course, my amazing parents made the trip to cheer us on.
During that race, I was full of so many emotions. I was extremely disappointed that all of my hard work had not resulted in a finishing time that would get me to the Boston Marathon with my sister (who qualified back in May). And I was grateful that my health issues had led me to having a procedure that got rid of precancerous cells in my body. But I was also left with the realization that I may not actually have 50 more years on this earth to accomplish all of the goals that are on my bucket list.
And that is where I sit today, preparing to do something that I said I would never do.
I want with all of my heart, to run the Boston Marathon with my sister. She will be running it in April of 2017. So…I am going to apply for a charity spot and try to run it with her for a charity. And THAT, is what I said I would never do. I just never understood how anyone would be satisfied with running the Boston Marathon without really “earning” it. But, I sit here today thinking that if I don’t try my best to do everything I can to run it with her next year, I may never have another chance to run it with her. Because we just never know what life is going to hand us.
There’s definitely no guarantee that I will be chosen by a charity to run in Boston in April. And if I am chosen, it’s going to take a lot of hard work to raise the money I need to reach that goal. But it will be worth it.
And, God willing, some time down the road I will get to run Boston the way I want to run Boston. With a qualifying time that earns me that position. Then I can finally be done with Boston for good and cross it off that bucket list with a permanent marker.
Sparkle.Pounce.Do What It Takes.
-Kendra